Opened in February 1931; originally with an atmospheric interior and seating 1,446. The designs by architect Cecil Masey also featured a cafe, a Wurlitzer organ and full stage facilities. Renamed Odeon in 1961. Tripled in 1974, with Screen 1 the original circle, and screens 2 and 3 in the original stalls area.

The old dressing rooms were used as a base for Hospital Radio Colchester from 1975 to 1990.

The cinema closed on Sunday, October 13, 2002 when Odeon relocated to a new purpose built 8-screen multiplex nearby in Head Street.

The old building is currently derelict, although plans have been submitted to turn it into a nightclub. 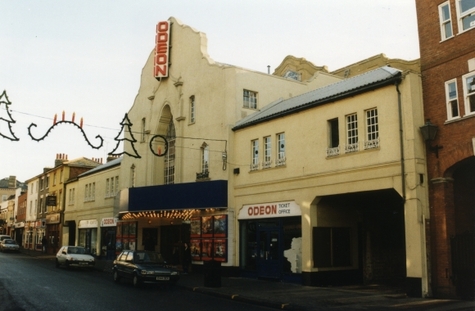 An image showing a picture of the facade in 2000.